Building blocks made of fungi

Building blocks made of fungi

KIT researchers are testing fungi roots as an alternative and sustainable building material. They are presenting a “MycoTree“ made of fungi and bamboo at the Biennale in Seoul.

Source
Carlina Teteris
Researchers from KIT and ETH present the „MycoTree“ in Seoul. They created a stable structure made of mycelia and bamboo.

Buildings have to be much more than four walls and a roof. They have to withstand rain and wind and provide shelter. But more recently another aspect has come into focus as well: they have to be made of sustainable material. Therefore, researchers at the Karlsruhe Institute of Technology (KIT) are looking for alternative building materials.

They found that the root system of fungi offers an excellent alternative option. The researchers are presenting their “MycoTree” at the Seoul Biennale of Architecture and Urbanism 2017 until November 5. The structure is made of mycelia, the largely underground filaments of fungi, and bamboo. Using graphical, three-dimensional static overlays the researchers were able to optimise the structure and make it viable and stable.

Renewable materials for the building trade

Until now there have only been a limited number of building materials available, which were therefore used almost ubiquitously. However, these resources are limited: for instance, sand, an important aggregate for concrete, is already becoming sparse in some regions; moreover, the usage of reinforced concrete binds many countries to import trade deals.

Together with the Block Research Group at ETH Zurich, researchers at KIT are investigating the use of renewable materials in architecture. Karsten Schlesier and Felix Heisel head the multidisciplinary team, which consists of architects, civil- and bioengineers, as well as researchers from the field of material- and energy sciences.

The “MycoTree” that the scientists are presenting in Seoul is made of mycelia, the underground fibre network of fungi, and bamboo. The mycelia are a fast growing network of filamentous cells. Fungi are feeding on cellulose, the main component of plant cells, and convert this into chitin. In order to produce building blocks out of the mycelia the research team used the fungi Ganoderma lucidum and mixed the fungi network with woodchips and other plant-based waste materials.

Mycotech, an industry partner in Indonesia, can grow a thick, sponge-like substance within a few days. Subsequently, this substance can be transferred into almost any form, where it will continue to grow for a few more days. Following this the substance is dried in order to stop the growth and to kill the fungi. The end results are lightweight building blocks that have great insulation capacities and can be applied in stable and self-sufficient layers.

Thus far, one disadvantage of many sustainable and eco-friendly building materials has been their relative lack of mechanical strength. However, by specifically designing the geometric form and thus the intrinsic forces, these qualities can be greatly improved.

For this the researchers at KIT and ETH employ graphical static techniques that solve problems at the drawing board. By using this new technology they broadened the traditionally two-dimensional graphical static to include the third dimension. This combination of techniques could allow for renewable and sustainable materials to replace conventional building methods and materials. 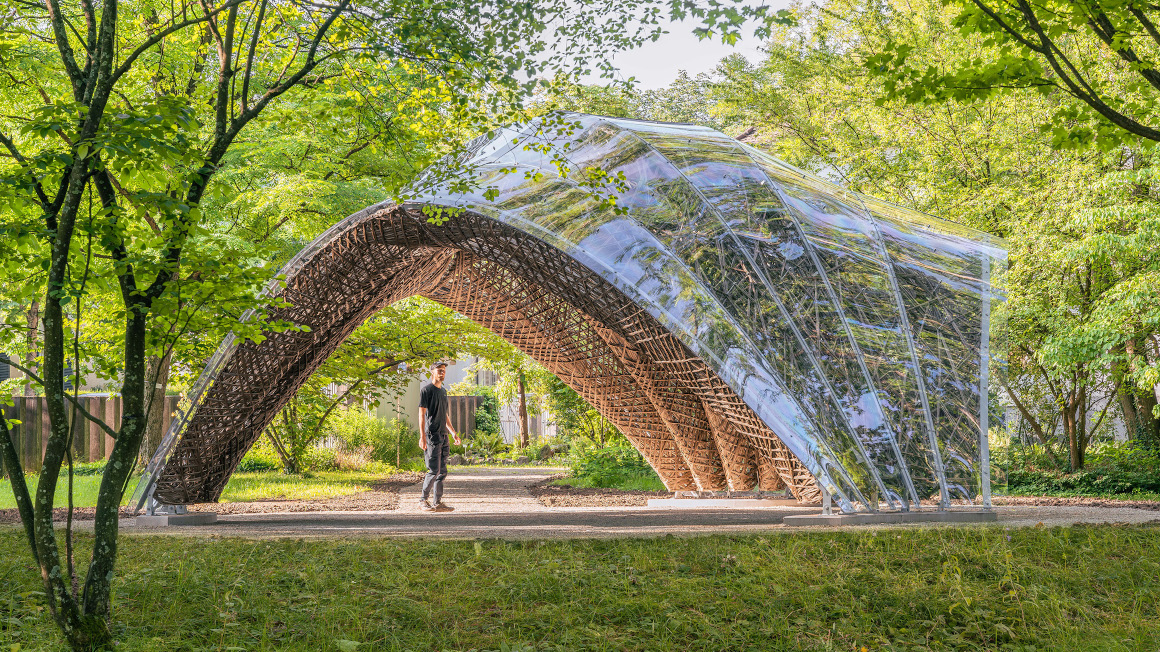 Premiere for pavilion made of flax fibers